ALLELUIA!  You are welcome to join us online on May 16 at 10:00 AM for our 7th Sunday of Easter Service.

The church is closed for in-person worship due to health restrictions and guidelines to help prevent the spread of Covid-19.  Our Sunday Worship Service will be on our Facebook Live at 10:00 AM on May 16. You do not have to have a Facebook account to watch.  Here is the link to the Facebook page: https://www.facebook.com/immanuelwetaskiwin/ 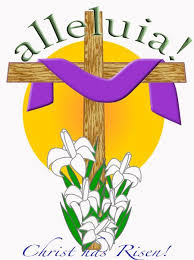 What is the Easter Season?

In some denominations of Protestant Christianity, Easter Sunday marks the beginning of  Eastertide, or the Easter Season.  Eastertide ends on the 50th day after Easter, which is known as Pentecost Sunday.  This year Pentecost Sunday will be observed on Sunday, May 23rd.

What is the true meaning of Easter?

Easter, also called Pascha (Greek, Latin) or Resurrection Sunday, is a festival and holiday celebrating the resurrection of Jesus from the dead, described in the New Testament as having occurred on the third day of his burial after his crucifixion by the Romans at Calvary c. 30 AD.

Why do we celebrate Easter with eggs?

The egg, an ancient symbol of new life, has been associated with pagan festivals celebrating spring. From a Christian perspective, Easter eggs are said to represent Jesus' emergence from the tomb and resurrection.

How did dying Easter eggs start?

In the Orthodox and Eastern Catholic Churches, Easter eggs are dyed red to represent the blood of Christ, with further symbolism being found in the hard shell of the egg symbolizing the sealed Tomb of Christ — the cracking of which symbolized his resurrection from the dead.

What does the Easter Bunny have to do with Jesus?

According to History.com, Easter eggs represent Jesus' resurrection. However, this association came much later when Roman Catholicism became the dominant religion in Germany in the 15th century and merged with already ingrained pagan beliefs. The first Easter Bunny legend was documented in the 1500s.

Why is the Easter lily a sign of new birth?

Known to Christians as the “white-robed apostle of hope,” the Easter lily has also been a religious symbol since the birth of the Christian religion. It's also believed that the lilies grew where Jesus' sweat and tears fell to the ground during his crucifixion.

What are traditional Easter colors?

How is the date of Easter determined?

Easter Sunday is a moveable feast, which can occur as early as March 22 and as late as April 25.  In 325CE the Council of Nicaea established that Easter would be held on the first Sunday after the first Full Moon occurring on or after the vernal equinox.(*) From that point forward, the Easter date depended on the ecclesiastical approximation of March 21 for the vernal equinox.